They were originally formed as Space Force Marines. Their armor and weapons vary in their divisions. They operate over all of Military space. Despite originally being formed as a defense force against extraterrestrials, they have been used for far more than that, as they are among the most effective units in the Military. A.D.U. Marines have the same serious demeanor as other Military units.

Standard A.D.U. Marines, mainly humans, wear grey armor, which, despite seeming rather unprotective, is a highly advanced and extremely durable Keplerium and Imperialite exosuit, which allows them to breath in space and survive in any environment. It gives them a very high resistance to all forms of attack, along with their weapons doing high amounts of damage. More advanced marines wear bulkier armor. They usually carry LF-17 laser rifles. A.D.U. Marines receive cybernetic enhancements, some more than others.

-Greeting a soldier or official of higher rank.

-Newspeak version of commencing an attack.

"Hostiles! Take them down!"

-Attacked by the player or another enemy.

-Attacked by Swarmers or other swarming aliens of small stature.

-Attacked by alien animals and other creatures, even magical creatures such as Werewolves.

-Attacked by zombies or other undead creatures.

-Attacked by an Inversion.

An A.D.U. Marine with a Shooting Star rifle

A group of A.D.U. Marines assaulting an Imperial compound 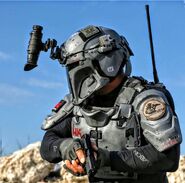 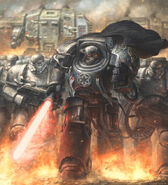 A group of A.D.U. Juggernauts, led by an Elite Juggernaut, attacking an alien stronghold

A.D.U. cyborg soldier
Add a photo to this gallery
Edit

Retrieved from "https://bossfight-universe.fandom.com/wiki/A.D.U._Marine?oldid=2613"
Community content is available under CC-BY-SA unless otherwise noted.