The origin of City Guards varies for each faction, but they were mainly created because of a need to enforce the laws the government of each faction put forth.

City Guards are mainly Human law enforcement officers, with a general attire of a blue uniform with a badge and belt with weapons and other gear. Most wear matching hats and dark sunglasses. However, there are many deviations from the basic uniform design, such as varying colors or hat design. Some City Guards could be robotic, such as Englatron City Guards. More advanced City Guards under the Government and other major factions can have light exosuits and laser weaponry. Alien City Guards or City Guards of other races will have armor and uniforms that are custom made for their bodies.

"We got a lawbreaker!"

"Halt right where you are!"

-Megahighway Security engaging a criminal in a vehicle.

-Generic when attacked by Zombies.

-Megacity Guards when attacked by Zombies.

-Generic attacked by a Werewolf.

-Megacity Guard when attacked by a robot.

-Megacity Guard when attacked by magic or magical beings. 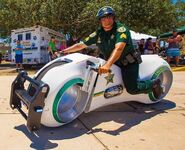 A Megacity Guard
Add a photo to this gallery
Retrieved from "https://bossfight-universe.fandom.com/wiki/City_Guard?oldid=2861"
Community content is available under CC-BY-SA unless otherwise noted.