Cyberformed Terrans are humans who have been abducted by the Intergalactic Empire and turned into robot soldiers. They can be found on many places within the Milky Way, disguised as normal civilians. Some served as security and soldiers to the Empire. Following the fall of the Intergalactic Empire, most were recalled to the now fragmented Imperial galaxies for their war for the throne. The ones who were left became part of the Milky Way. Without the Empire controlling them anymore, many became reformed, and began to act as civilians, taking jobs in construction, accounting, business, commercial space travel, as aides to Government and Military officials, and one even served in the Blue Star headquarters.

Cyberformed Terrans are physically indistinguishable from normal humans. Beneath their skin, they have a robot Imperialite skeleton. They have highly advanced systems and processing units. Their skeletons are very durable, and Cyberformed have the same durability as an Intergalactic Empire Sentinel. However, their skin can be easily shot off, revealing their robotic skeleton beneath it. They are known to be agile, fast, and extremely strong, able to easily overpower most players and break through armor with their bare hands. They are usually armed with hidden plasma guns. While disguised, Cyberformed dress and act like normal NPCs, interacting with other NPCs, displaying emotes, and idly hanging around. When provoked or when the player gets into range, they will reveal themselves and attack. Players can use an A.D.U. scanner to reveal them, which will cause them to attack. They can have speech interactions with the player, and will usually try to disarm the player by claiming that they are from the Military or Government. If the player calls them out as a Cyberformed, the Cyberformed will simply attack them. Cyberformed are known to drop Imperialite scraps, Imperial tech fragments, their gun, and rarely, their skull or their power core. Elite Cyberformed are used as Imperial infantry soldiers, and do not disguise.

-Greeting the player while disguised.

"STUPID HUMAN YOU WILL BOW TO THE GLORY OF THE- Uh...you didn't hear that." 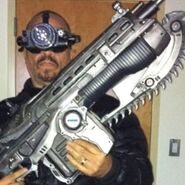 Elite Cyberformed with Imperial Saw Rifle. This one was later captured and reprogrammed by Blue Star.

A Cyberformed Terran acting as a civilian following the Trans Galactic War
Add a photo to this gallery
Retrieved from "https://bossfight-universe.fandom.com/wiki/Cyberformed_Terrans?oldid=2450"
Community content is available under CC-BY-SA unless otherwise noted.