Fabricators are a non-playable race of Titanian robots, and were divided into 17 tiers.

Fabricators are robots, and thus are not truly alive, but are sentient nonetheless. All Fabricators bear the a humanoid form. Some would say they loosely resemble a human in some kind of exosuit. They all possess a glowing core in their chest, which is a Reality Stone. They are powered by both and Energy Stone and Reality Stone. Their faces are often flesh colored, and loosely resemble a human, only with a flat nose and glowing red eyes (the first models had green eyes). The color of their core changes per model. The color and design of their armor also changes, although the general shape remains the same. They have a glowing circle in their palms, which they can use to channel energy. Fabricators are able to channel raw energy, and Tier 17 Fabricators are able to make elaborate constructs and Novamen, as they are the only type of Fabricator able to channel celestial energy. All models past Tier 8 possessed a twelfth level intellect. They are unable to be affected by emotional attacks, mental attacks, or illusions. They do posses their own level of emotion.

Fabricators were built by the Old Titanian Kingdom, an intergalactic Titanian state that would later become the Titanian Empire, uniting their race and the entire Multiverse for a time. Sometime after the Tier 1 Fabricator was created, the Titanians created a being known as Lord Fabricator, an impossibly massive Fabricator that served as a sort of master mold for the following Fabricator models, mass producing them from its chest. After the war began, Lord Fabricator disappeared off of the face of the cosmos. Fabricators were built to control interplanetary power grids and serve as a police force for their empire. Out of all the models made, only Tier 8 and Tier 17 Fabricators were left operational. All other models of Fabricators were declared obsolete, decommissioned, and scrapped. However, after many years, many Tier 17 Fabricators went rogue, simply killing the entire population of galaxies that they deemed to be criminals, and making Novamen and other Fabricators follow them. They gained their own thoughts, and believed themselves to be gods, the same route the Traitors followed. Many were put down, but many more escaped. The Fabricators that didn't go rogue were decommissioned for a time, and recommissioned after the Titanian Empire was founded. During the Great Titanian Civil War, the rogue Fabricators sided with the Traitors. The ones that were still under the Wise Titanians became great assets during that war. Some Fabricators got multiple upgrades, becoming giant and far more powerful. One even tried to take over Earth in the distant future.

Fabricators don't have their own true society. They do, however, place all Tier 8 Fabricators in the service of Tier 17 Fabricators, who serve as the overlords of lower Fabricators. However, Lord Fabricator was the single ruler of all Fabricators.

INTelligence is at twelfth level intellect.

Heavily resistant to many forms of attacks (resistances increase by Tier)

Extreme levels of strength, able to smash reinforced armor in a single hit and shatter blades.

Other stats to be added 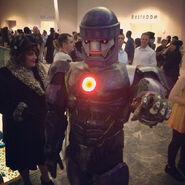 A rogue Fabricator appears on Earth 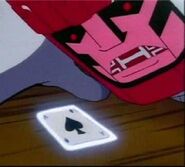 A Fabricator inspects an object on the ground, identifying it as the ace of spades
Add a photo to this gallery
Retrieved from "https://bossfight-universe.fandom.com/wiki/Fabricator?oldid=2445"
Community content is available under CC-BY-SA unless otherwise noted.