Imperial Infantrymen are common enemies from the Galactic Salvation storyline, often accompanied by Elite Cyberformed Terrans, Intergalactic Empire Battle Drones, or Intergalactic Empire Sentinels. They are heavily resistant to physical attacks and energy attacks, and are completely immune to flame-based attacks, due to their exosuits. They carry Imperial laser guns, and can use grenades and energy knives as well. Imperial Elites have more resistances and deal more damage, as they carry heavier weaponry. However, Imperial Elites are fewer in number and have a slightly slower movement speed.

After The Intergalactic Emperor created the Intergalactic Empire, he turned many alien species into cyborgs to serve as his soldiers. The Imperial Infantrymen were the basic soldiers, attacking planetside regions and boarding enemy starships. Once an alien became an Imperial soldier, they would serve until they die, as the cybernetics drastically reduced their aging process. They would become rather emotionless, and sometimes didn't take off their armor for extended periods of time. Aliens that are given heavier cybernetics become Imperial Elites.

Imperial Infantrymen are mostly humanoid aliens in futuristic exosuits. They usually have near-identical features to Humans in terms of body shape, limbs, and other features, but usually have different skin colors, eye colors, or skin textures. Standard armor is black, while elite armor is white. The elite exosuits are notably bulkier than the standard ones. The exosuits change for species with extra limbs, different body shapes, and non-humanoids. Imperial Elites also have more cybernetics on their bodies. 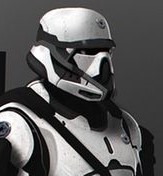 An Elite Imperial Infantryman
Add a photo to this gallery
Retrieved from "https://bossfight-universe.fandom.com/wiki/Imperial_Infantrymen?oldid=3239"
Community content is available under CC-BY-SA unless otherwise noted.