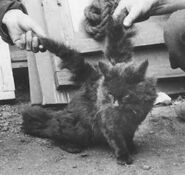 Two humans showing off a N'vanlenoid's wings while it's in cat form during the pre-Government era.
Community content is available under CC-BY-SA unless otherwise noted.
Advertisement