Varies
Terran Security units are Earth's standard soldiers. They attack any enemies that come into view, and will attack the player if provoked.

Terran Security units, mainly made up of Humans, wear varying armor and wield varying weapons. Their armor is usually a mix of non magnetic titanium alloys and Keplerium worn over standard BDUs. Some even wear the more advanced Imperialite armor. As the game goes on, more and more soldiers wore Imperialite armor. Each type of soldier has their own uniform and weaponry. However, almost all of them share the same no-nonsense, serious and highly disciplined behavior. Reserves soldiers are known to be more casual.

-Greeting the player (as long as the player isn't in the Military or Government.)

-Attacked by an enemy.

-Attacked by Babypedes or other swarming creatures of larger stature.

-Attacked by magic or supernatural attacks.

"Magic is but an illusion."

-Killing a magical being or spell user.

"What the- lycanthropy! Fire!"

-Attacked by a Werewolf.

Immigration Officer with access card to the Umbrella Corporation 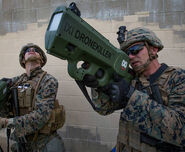 A soldier next to a Megablaster

A soldier in a black uniform assigned to sell heavy weapons, pictured holding an Orlov-16

A soldier alongside a mech

A soldier with an advanced plasma rifle 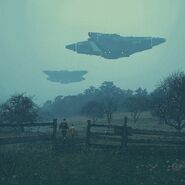 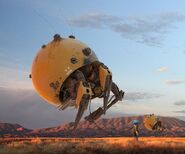 Scout units mapping out a deserted island
Add a photo to this gallery
Retrieved from "https://bossfight-universe.fandom.com/wiki/Terran_Security_Unit?oldid=2611"
Community content is available under CC-BY-SA unless otherwise noted.