Since Fear entered the cosmos

Realm of the Abstract

None
Terror Vision is the embodiment of Fear, and a lategame boss. Terror Vision is truly unkillable, however, his physical manifestation can be "killed" or driven out of the Physical Planes. His mere presence gives players their companions fear debuffs (if they can feel emotions). Terror Vision feeds off of fear, and as long as the player and their companions are afraid, he will keep getting stronger. Attacking him while afraid does little to no damage. However, if the player bravely stands against him, refusing his commands to give in, or by using their own traits to counter the fear debuff, Terror Vision will be injured without even being hit. He will begin to lose his hold, and gaping wounds will appear on his body. If attacked in this state, he is vulnerable, and will take heavy damage. However, he can still fight back, using blasts of pure fear, summoning monsters and demons, and using seemingly conventional weapons, such as blades and firearms. When killed, his body will gruesomely melt, his screen will crack, turn off, and then his TV head sinks into the ground and disappears. Terror Vision will reform after a few days. Terror Vision usually appears in random areas, such as alleyways, fields, and desolate areas. He will ask the player if they want to see what's on the prime time, using a warm tone (this switches to demonic and angry when he attacks). If the player gets close, he will grab them, and then kill them, showing them images of what they fear, and sucking out their soul. If the player begins to resist him, his screen will flicker, and he will let go of them. His screen then turns into a grotesque mouth, which he will attack the player with. It turns back into a screen when he is killed.

Terror Vision is the embodiment of Fear. As such, he is an abstract concept, and can exist throughout almost all the cosmos. He is unable to enter Heaven, or go anywhere near it. He has existed ever since the first living creature to have emotions felt fear. However, he only existed in physical form for the last 1.5 trillion years.

Terror Vision bears the form of an adult humanoid male, except he has an old TV for a head. He has a fair skin tone, and always wears a grey business suit. However, he sometimes sheds the jacket, leaving only his white undershirt, and occasionally changes his tie. His TV head is has a black front and a brown body. He has two buttons on the left side of his head, which glow white in the dark. His screen is usually broadcasts static or a pure white screen, sometimes showing a light outline of a face. If out in an open field or wide, open aired area, he is sometimes accompanied by balloons. When he attacks, an illusion over his body fades, making the player able to see bloodstains all over his body, and causing him to grow taller. When his screen changes into a mouth, the teeth are fanged and yellow, and the gums appear diseased. He can display any image he wants on his screen.

"Do you want to see what's on the prime time?"

"I have all your favorite shows right here."

-Terror Vision trying to convince the player to come closer.

"I know what you're afraid of." 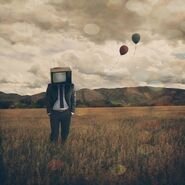 Terror Vision in an open field, with two balloons near him 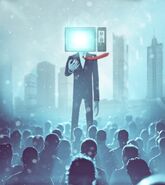 Terror Vision appears above a crowd, changing the color of his tie.
Add a photo to this gallery
Retrieved from "https://bossfight-universe.fandom.com/wiki/Terror_Vision?oldid=2594"
Community content is available under CC-BY-SA unless otherwise noted.