UwUsassins, as the name implies, are a hostile non-playable race of humanoids. They are almost always randomly encountered and have no set spawn points, settlements, or events linked to them, with only one notable exception.

UwUsassins take the form of relatively tall humans, blandly clothed in attire that looks like 21-century clothing including jeans and white shirts. They stand out from other races by having a giant, disproportioned head in the shape of a cardboard box, in both white and brown color. On the box, three letters, UwU or very rarely OwO are painted on. Small amounts of papyrus containing lore in the caves of D'e viantaart show the player that these two races were in war sometime near 1600-1700 on the history of main events, somehow unnoticed by the other races, such as Humans.

UwUsassins, while quite frail in terms of magic abilities and health points, are masters of marksmanship and melee combat. Some of them prefer objects like sledgehammers or other random objects, but most lug around an large plastic blaster, tagged with the word Nerf. These can be looted and are respectable early-mid game ranged weapons, not winning from a wand or bow in damage but possesing a much higher firerate.

The UwUpouncer is the basic force of the UwUsassins, a pack of more than five has atleast two of them. Whole packs of UwUpouncers exist, but they get replaced with UwUshooters and UwUsnipers once the player levels up.

UwUpouncers pack quite the punch, capable of 1v1'ing a low level player if they can close the gap. However, they are limited by their short range and low hp. The strategy of dealing with an UwUpouncer consists of kiting it and letting it attack which it does quite slowly. High level players should have no problem with them (Headshots are very effective against UwUsassins) except if they and their companions are abushed by a pack.

It drops a normal foam LARP sledgehammer or wrench on death, along with normal clothes. It has a 3.5% chance to drop the UwU box head, which gives the player a big boost in his Cringe stat.

The UwUshooter is the ranged counterpart of the UwUpouncer, and just as common. This may be the first UwUsassin the player meets, due to them being very loud and dangerous on the lower levels. Lugging around a fully automatic nerf stampede, they have the capability to pepper a player full of darts. The darts don't do much damage on their own, but the shortranged bursts almost always outgun bow-wielding players and users of other weapons with slow reload times. They also appear in large packs and have a more conservative fighting style than the UwUpouncers. They hide behind any cover the can find, making hitting them a difficult task. They roll to put out fire spells and flames and can gun butt the player if he or she comes to close for comfort.  They can be spotted from far away, and are bad at ambushed because the stampede CS-6 is notorious for it's ear raping noise.

Needledarts are an upgraded version of the UwUshooter. They have more hp, Reinforced box heads, spawn a lot more often, and carry a rapidstrike instead of a stampede. They have needle-tipped darts, which dish out a great amount of punishment. These only appear when the player reaches level 51.

The UwUsniper carries a big nerf longshot. It has an even larger head than all of the other UwUsassins. It prefers to stay in the distance, engaging in combat from afar. It can one-shot everyone below level 15 in one hit, but it needs exponentially more hits to kill higher level players. It is still hard to fight below level 35, which is the level where it needs 3 hits to kill a player. It is a slow enemy, and weak in melee combat, only capable of using a limp-wristed gun butt shove. It has low hp. UwUsnipers are saved by the fact that they are very crafty, capable of using every cover they can find and hide behind other enemies, and even building their own cover from corpses and fallen building materials. It's sniper rifle has a 10% chance to drop upon death.

The thot slayer is a special UwUsniper. It has almost no chance of spawning, but when it does, it could be almost considered a miniboss on it's own. They have significantly more hp, endurance and speed. It has it's own voice lines, including If there is a god, he will have to beg for my forgiveness when idle and not attacking. Never drops his gun, is purely a challenge. If the player is female, or has chosen a female member of a race, the thot destroyer deals greatly increased damage, one-shotting the player up to level 57.

The UwUdancer is a special UwUsassin that does not attack, but only dances to regenerate his packs health points. The more UwUsassins there are, the slower their healing goes. It's presence is announced by a strange song called resonance. Low in health points, but high skill in magic.

OWOsassins had believed to be died out after roughly 1785, unknown to most of the world. Their race had been massacred by the UwUsassins, which were much larger in numbers. However, a player can encounter an OWOsassin in the overworld, with a small chance of 0,5%. They are neutral and will only attack once the player hits them twice, seeing the first hit as an accident. They roam around, sometimes engaging in fights with UwUsassins which are always lost.  They can trade the player the uwu box head, so he or she doesn't have to loot it from an UwUsledge. It has a small nerf jolt it uses to attack.

'There is only one linked event to the UwUsassins. In the great city of CHAD, a merchant talks about the cursed armory, a location ingame where a couple high level gear items can be found. After talking for a while, the merchant will ask you to go to the secret armory to get a mythical piece of gear, the S'támpéd'e. There are a couple low level enemies to be fought on the way in, but at the doors of the cursed armory stands uwu, guard of the cursed armory.

Uwu has the appearance of a enlarged UwUshooter, with a lot more cuts and battle wounds from previous fights. While uwu is not the strongest boss, he is still a very tough enemy, firing bursts of needledarts and draining the players health if they are standing still to aim too much. Standing about 9 foot in height, he is a considerably bigger target, but has a enormous amount of health points. Uwu carries the S'támpéd'e, a legendary mythical grade nerf rifle.

After killing uwu, which is a lot easier with explosives or a tough melee weapon, he will succumb to his wounds. The player can then loot his weapon and enter the armory. The player can then return to the city of CHAD and give the merchant the gun for some pocket shekels, or keep it to himself and gain some negative karma.

A shopkeeper in the town of Neckbeardia mentions: ''Strange, boxheaded creatures have kept following me through the woods a couple times. They couldn't be reasoned with, they must've wanted my body pillow. I suspect they are all female, because they present the exact same toxic behavior of not liking me. What if i find one of them, you ask? Well, sweet summer child, shoot em dead!''

Travelers and adventurers coming from near the cursed armory will sometimes mention uwu in their dialogue.''There is some kind of weird, 9 foot tall man in white shirt and jeans playing with a buzzing toy gun in there. I don't know what to think of it, but please play it safe. It may be not as clownish and harmless as it sounds.''

''Hey man, before you go down there, tell the fucker with the toy gun that he should quit his shit. My children can't sleep.'' 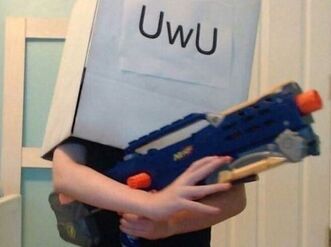 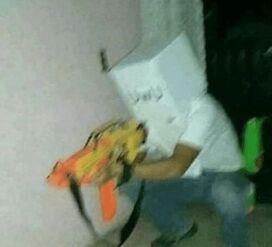 UwUshooter, the basic infantry unit of the pack. 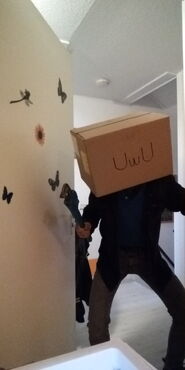 UwUpouncer, brandishing a pipe wrench as melee weapon.
Add a photo to this gallery
Retrieved from "https://bossfight-universe.fandom.com/wiki/The_UwUsassin?oldid=3053"
Community content is available under CC-BY-SA unless otherwise noted.